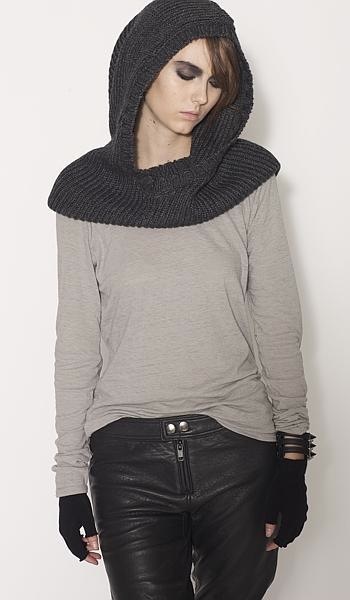 I got a little peek at H&M’s forthcoming The Girl With the Dragon Tattoo-inspired women’s collection when it was announced in WWD last week and now here’s a full styled-out looks courtesy of the New York Post.

The collection, which was designed by the film’s costume designer, Trish Summerville, is inspired by Lisbeth Salander, the film (and book)’s ass-kicking, crime-solving, computer-hacking female protagonist. Summerville told the daily, “I tried to pick pieces from the film and adapt them to make them a little more fashionable for real-life women.” When asked what she thought Salander would think of “all of this commercialism,” responded with reason, “She’s a character from books. So she doesn’t really have a voice in it.” It’s true.

The Post styled five looks from the collection on smokey-eyed, pixie-haired models that are kind of giving us Kate Lanphear vibes. The collection is obviously tough and tomboyish, but as individual pieces, we could see it being pretty versatile.

The Post also calls mold-breaking Lisbeth Salandar “a style icon for the modern age.” Does that mean we’ll be seeing lots of girls with super-short bangs and leather jackets next season? Zoe Kravitz seems to be on board with the trend, at least hair-wise, and Rooney Mara’s rocking the short bangs on the cover of Vogue. Will you be next? Below see all the looks!